Get Involved: How to get into Basketball - Mark Harrod Ltd.

The fourth instalment of our ‘Get Involved’ series is on Basketball. This series is intended to help inspire, motivate and get more people involved in the world of sport!

Every week, 175,000 people between the age of 14 and 25 head to the Basketball court – that’s the same number as Golf and Cricket players combined! 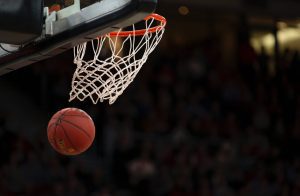 Basketball is a fast-paced, indoor sport consisting of two teams of 5. The aim of the game is to throw the ball into the opponent’s hoop to be awarded with 1,2 or 3 points for your team. The game itself lasts for a duration of 48 minutes split into four 12-minute periods – plus a 15-minute halftime. It may seem that the game is quite short but due to frequent stops, a game usually runs for around 2 and a half hours.

Every game begins with a tip-off, this is when the referee throws the ball upwards and one member of each team jumps to try and knock the ball back to their team. The purpose of a tip-off is to gain control of the ball.

Yes that’s right, Basketball players can score up to 3 points per goal depending on the situation.

Starting with the 2-point shot, 2 points are awarded for all field goals scored from within the 3-point line. This is the most common score awarded in a match as it’s the closest to the basketball hoop.

Next is the 3-point shot, these are awarded for all field goals scored from outside the 3-point line. Be extra careful of this, even if your foot touches the line it will only be worth 2 points!

Lastly is the 1-point shot. After a foul, the referee may grant a free throw. If a player then scores a free throw, they are awarded with 1 point.

There are various types of Basketball so everyone can get involved!

Basketball is a team sport that helps develop a child’s self-esteem, confidence and teamwork skills. The sport is fun to play and is enjoyed by youngsters all across the country. 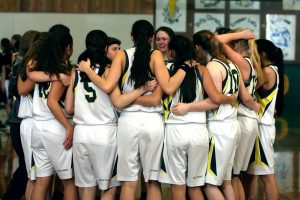 With the numbers increasing year by year, there has never been a better time to get involved in women’s Basketball.

Compared to men’s Basketball, the ball for women ranges in size from 28.5 inches to 29 inches which is a full inch smaller than the men’s ball. Other differences include the five-second rule that is applied if there is a defender within 6 feet of the player – in women’s the defender has to be within three feet.

Basketball is one of the most popular men’s sports in the UK and as of 2019, approximately 280,900 adults play at least twice per month. Despite a few minor differences, men’s and women’s basketball is virtually the same – Find your nearest Basketball Club here!

Wheelchair Basketball has been featured at every Paralympic Games since 1960 (women’s since 1968). Teams are comprised of 5 players and 7 substitutes, with matches consisting of 4 periods of 10 minutes.

Walking Basketball is a great sport for those who want to get fit whilst having some fun. It’s typically aimed at those who can’t play normal Basketball due to age, fitness or ability but anyone can get involved. The same rules are applied but instead of running, you walk! This steadier paced version means people of all abilities can get involved in the game and become a part of a team.

Basketball games consist of dribbling, passing and shooting which makes for a great all-round workout. Here are a few of the benefits you will receive from a game of basketball!

If you are trying to lose weight or get fitter, Basketball is a great way to burn calories. It’s said that one hour of basketball can burn between 630-750 calories – depending on how hard you work!

It goes without saying that Basketball is a very physically demanding sport. Both the muscles and bones in your body become stronger when playing basketball due to all the tugging and pushing of muscles against bone.

Spatial awareness is one of the many skills you will adapt over time while playing Basketball.

Now you know all the ways in which you can get involved in Basketball. Mark Harrod Ltd supply a wide range of sports equipment which includes goals and training equipment. Visit our shop to browse!