How to take a free kick (like a superstar!) - Mark Harrod Ltd.

Sometimes you just don’t want to cross the ball. Sometimes you want to be that player who scores the goal and cover yourself in glory, forget the teammates.

Scoring a direct free kick is a fantastic feeling of which nothing much else compares on the pitch. In this article, we take you through the steps of how to take a free kick, including some cheeky tricks, but also how to take them like some of the best players in the game!

Watching the keeper and the wall 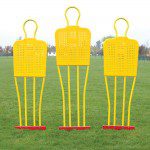 Before you take your free kick it’s tactical to pay close attention to the keeper. The keeper’s body language and position in the goal can help determine where the best place is to aim your kick. When a direct free kick is called, the opposing players will form a wall ten yards from the taker.

Although the purpose of the wall is to help the keeper defend against the kick, it can also be a distraction in his view. Generally, the keeper will stay in the middle of the goal to be able to react fast either side. If this is the case, try a sharp shot high/low on either side of him – these tend to be the hardest to react too. Our free kick men and free kick trolley are a great training aid for simulating a defending wall.

If the keeper’s body language appears to show them focusing on one side of the goal, aim your shot to the opposite side, the keeper will then have further to travel to make the save. 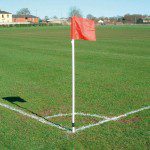 Before a game, you should be well aware of which direction the wind is blowing. Without realising, the wind can severely impact and alter the direction of the ball. The solution? Take a peek at the corner flags before you set up your shot to ensure the wind isn’t going to prevent your team of a goal.

If it’s a particularly windy day, putting more power into your shot will help fight against the gusts of wind. The wind will have much more of an effect on a weak shot and the ball is likely to sail over the goal posts.

Following through is essential for a successful free kick. If you don’t follow the kicking motion through your shot it is likely to end up in a different spot than intended. Think of your leg as a pendulum swing going straight through the ball, this is going to control the ball’s direction. 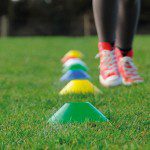 The power needed for your shot dictates the length of the run-up. If the ball needs to travel far to the goal, a long run-up of about six steps would be suitable.

Practising your run-up is a great step to take because a stuttered-step in your run can affect your power and accuracy.

When preparing for a shot, take into consideration the strength of your leg. If you’re a particularly weak striker it may be best to take a couple more steps back to gain more power. If you need some help determining the length of run-up required, try marking it out with small markers or cones.

Keep your standing foot close to the ball

Perfecting your free kick isn’t just about your stronger foot. It’s important to keep your non-kicking foot as close to the ball as possible. The nearer the ball is to your foot, the better control you will have over the ball’s direction. If the non-kicking foot isn’t positioned near, you may unintentionally slice your shot (unsuccessfully kick the ball).

Where your foot touches the ball can give a clear indication of where your shot will land. If you want your kick to travel straight, aiming just below the center of the ball is key. Doing this will also give your shot more power to where it is heading. This type of shot is great for when you see an opening to a teammate during a game.

During a game it can be hard to find a straight path towards a teammate or the goal and sometimes curling your shot is the only option. To curl, contact the ball with the inside of your foot and try and kick it slightly to the right of its centre – this will make it spin. The technical term for making this happen is the Magnus Effect. Once you’ve made contact with the ball, follow it through towards your opposite leg. This technique can help you in an array of situations.

Making a unique Shot with a knuckle Ball

A knuckle ball is a kick that has virtually no spin, thus creating an unpredictable flight. To kick a knuckle ball, kick it with the densest part of your foot and don’t follow through. Following through will make it spin. 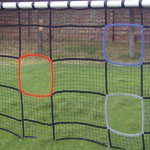 Make sure you practice!

Whether kicking straight, curling or knuckling it is important you work on your aim otherwise you’ll waste a lot of scoring opportunities. Consider adding a target net to the goal you are practising in or have some cones in the bottom corners to knock over.

If you’re advanced enough to kick the ball with both feet, change your kicking foot depending on what side of the goal you are on. This will make your shot more effective and give you more of a chance of scoring.

Catch the keeper off guard

A common step taken by a striker is spending a long time after the whistle has been blown, to shoot a free kick. Trying to catch the keeper off guard is a great thing to keep in mind during a game. Perhaps instead of giving the keeper a longer time to prepare, shoot immediately after the whistle to give a short time for the keeper to react.

If you’re not getting over the wall why not try going under it? You could also try kicking directly at the keeper as he may be expecting you to go straight over the wall. Either way, try to practice your free kicks from all angles and aim for different corners. This will help you become more confident shooting in more difficult situations and positions.

Ronaldo perfects his free kicks by always taking three steps back to ensure he has enough space when he strikes the ball. He then runs up to the ball, placing his supporting foot a couple of inches away from the ball, creating that control which is required for a successful shot.

Using all his power he kicks the ball, leaning the upper body back a little. As he hits the ball with speed, he lowers his body as he follows through. You can see below that he’s kept his technique fairly consistent. Don’t fix what isn’t broken!

Lionel Messi has more free kick goals over the last four La Liga seasons than any other team in Europe’s top five leagues, and as the years have gone by, he has perfected his technique. When taking a free kick, Messi’s leg has an angle of 50 degrees.

He almost places his entire boot on the ground before hitting the ball, adding enormous amounts of stability and control to his shot. To improve this further, Messi arches his shoulders to the ball, to a more compact position. Check out this beauty below:

Lionel Messi gets his 600th career goal with a wonder freekick against Liverpool.

Roberto Carlos has a monstrous left foot and recognised as one of the best free kick takers in history.

His technique starts by taking six steps back and standing ever so slightly to the left side of the ball. He then gradually increases his speed as he gets closer to the ball. He strikes down into the ball using his laces and follows through as high as he possibly can.

Here he is scoring his famous freekick for Brazil against France:

ON THIS DAY: In 1997, Roberto Carlos defied physics and scored the greatest free-kick of all-time against France.

Before taking a free kick, Beckham makes sure the ball is still and takes six steps back. He analyses the situation on the field and aligns himself with the ball at a 45 degree angle.

Beckham approaches the ball from this angle in a controlled movement, not running too fast, and places his foot 6 inches from the ball.

As he kicks the ball, Beckham moves his opposite arm in a circle and bends his body back slightly to lift the ball off the ground, bending the ball over the wall. You probably know whats coming next…